You don’t get to taste a cake every day that consists in almost equal parts of fruit, nuts, and sweet dough. The following recipe provides proof that such a cake is something special! And what’s more, this insanely delicious pear-walnut cake has a secret ingredient that hardly any Romanian dessert would want to omit.

It’s not just ONE secret ingredient that makes every Romanian cake unmistakably delicious. There are TWO! Sometimes there is even a THIRD one.

But first things first. Before I let you in on the secrets of Romanian baking in general, I want to rave about this particular pear and walnut cake.

I have two personal quality criteria that I use to find out just how delicious a cake is.

The first criterion refers to the tastiness of the batter. I measure it on a scale that ranges from “Well, it’s good, sweet, just cake batter.” to “Whoa, that’s awesome! Nom, do you still need it, or can I eat it by the spoonful?”. Can you guess where this Romanian pear-nut cake lies on my ‘How good does it taste?’ scale? Definitely at “Woah, this is awesome!”.

The second quality criterion refers to the speed at which a cake “disappears” in our household. Do I want a second helping? Did I want to share the cake with the neighbors, but suddenly there are only crumbs left? Is the cake already gone on the second day? Yes. Yes. And another yes as an answer to the three questions concerning this Romanian cake (apologies to my neighbors).

Yet you wouldn’t know it as the cake looks inconspicuous. It is rather flat, brown-ish, and makes a big secret about what is inside. With a little luck, you can catch a glimpse of half a walnut or the round back of a pear piece. But that’s about all the cake reveals. A great keeper of secrets, that’s what it is!

And then the revelation! The very first bite – just wooow! Heavenly! Astonishing is not only the great balance of walnuts, batter, and fruit but particularly the variety and depth of flavor. You chew, you taste, you discover – and then you ask yourself what exactly it is that creates this phenomenal taste. Soon enough you don’t need to know it anymore, you just want to close your eyes, surrender to the deliciousness, and fully savor this amazing dessert.

Ok, enough raving over this dream cake, now on to the secret ingredient(s) as I don’t want to keep you in suspense any longer.

So, what IS the secret of Romanian cakes?

It is … tatatataaaaa … RUM! Or cognac! (If you know that kids will fancy a slice too, the rum can be substituted by rum flavoring.) A generous shot of alcohol is found in many Romanian desserts and, along with lemon zest (the second secret ingredient), enhances their flavor. The third ingredient that you will often find in Romanian cakes is walnuts.

There you have it: Rum, lemon zest, and walnuts form a triumvirate, a divine flavor union, in many Romanian desserts just like in the pear-walnut cake presented below. Those three ingredients join forces to delight your palate and make you happy.

Do try the pear-walnut cake and feel free to let me know in the comments what you think of the Romanian flavor triumvirate. And: Could you resist the tempting batter, or did you eat it by the spoonful just like me?

You don’t get to taste a cake every day that consists in almost equal parts of fruit, nuts, and sweet dough. The following recipe provides proof that such a cake is something special! And what’s more, this insanely delicious pear-walnut cake has a secret ingredient that hardly any Romanian dessert would want to omit: Rum.

Previous Post: « How to cope with a pandemic – Advice by an MBSR teacher & Leonard Cohen
Next Post: Vegan lemony gnocchi with sage – To get you into a summer mood »

Mindfulness means paying attention in a particular way: On purpose, in the present moment, and non-judgementally. 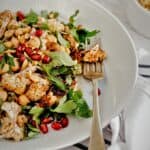 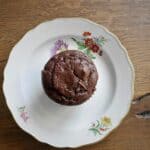 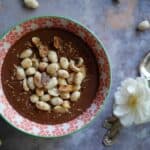 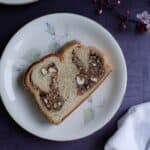 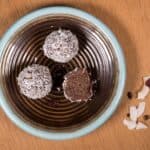