Fall is upon us, and with it, apple season, so it’s the perfect time to make all those apple pies, baked apples, and … apple sauce! If you’re like me, you won’t burst into excitement when thinking of making apple sauce. But, had I known before how easy it is to make and how much, much better it tastes than any store-bought apple sauce I ever ate, I’d have given it a try earlier.

I used to think that making apple sauce is a messy and time-intensive task, slaving away in the kitchen for a whole day. Then I did some research and came across an easier method of preservation, which I will explain below. Of course you can store apple sauce in the fridge for a couple of weeks, or in the freezer for years, but if you want to keep it at room temperature you will need to preserve it.

The recipe below yields 5 small jars (350 ml). This is not a big quantity, and if you have more apples, I recommend you double or triple the ingredients because it’s well worth it. The apple sauce tastes so good that you will probably eat it by the spoonful as a light dessert (like I do, I’ll admit it). Moreover, apple sauce is a staple when eating a plant-based diet, since it’s a great egg replacer, and it also serves as mild and natural sweetener. You can use apple sauce in pancakes, muffins, cakes, in your granola, overnight oats, smoothies, or energy bars. The possibilities are endless.

You will need some equipment, so here is what you want to have in place when you start:

5 glass jars with twist-off lids (each 350 ml)
1 small ladle
1 jar funnel
1-2 big tablespoons
Immersion blender
2 large pots (one for cooking the apples, and one for boiling the jars)
Tongs (to pick up the hot jars after boiling them)
1-2 clean kitchen towels

Sweet, Delicious Home Made Apple Sauce Without Added Sweetener (And a Simple Method of Preservation)

Fall is upon us, and with it, apple season, so it's the perfect time to make all those apple pies, baked apples, and ... apple sauce!
Prep Time1 hr
Cook Time1 hr
Total Time2 hrs
Keyword: gluten-free, vegan
Servings: 5 jars

You don't have to throw away the apple skins. You can freeze them and use small amounts for smoothies. Or you can dry the peels in the oven to make crunchy chips that you can use as a healthy snack or as a base for a fruity tea.

Previous Post: « Juicy Grilled Peaches with Rosemary and Walnuts
Next Post: Buckwheat Salad with Beet, Celery, and a Hint of Horseradish »

Let go of your mind and then be mindful. Close your ears and listen! 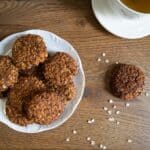 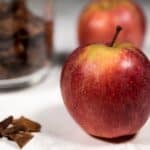 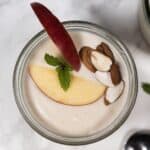 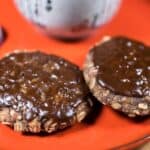 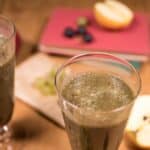 ‘Light touch of fall’ smoothie with sweet grapes and apples