In front of you is a large cup with your favorite ice-cream.

Next to it are chopsticks.

Now take the chopsticks and try to eat the ice cream with them. You will succeed, but it is tedious, takes a long time, and the process is anything but joyful.

What was the problem?

The wrong “tool” for the “task”. A dessert spoon is better suited for eating ice cream.

You can also “spoon” the ice cream from the cup with your fingers or lick it with your tongue. In the end, the cup will be empty, but a good deal of the yummy icecream will have landed either on your face or your fingers. Arrgh, sticky!

This example shows that there is not only one solution to a problem. Not just one tool to complete a task. However, some solutions and tools are better suited and more goal-oriented than others. Those save time and are less nerve-wracking.

Let’s talk about moods. More precisely, bad moods. What do you do when one of those strike you?

Which “tool” do you choose to feel better?

We all have a bad day, a bad week, the winter blues (or lockdown blues). Everyone will face eventually arguments at work or home, worries, or a little hangover.

The question, however, is what we do about it. What pick-me-ups do we choose?

Each person develops strategies over time to respond to challenging situations or negative moods.

Some call a friend or go for a walk in the park when they feel down (both an excellent choice). Others pour themselves a glass of wine, possibly one more and yet another one (not so good anymore) or let off steam by letting their mood out on others (yuck!).

Of course, you can also put on your running shoes and jog a few laps in the park if you’re in a bad mood. Exercise? Fresh Air? Nature? There is nothing wrong with that, there is hardly a better way to release endorphins. However, this mood-boosting strategy does not fit in every situation. For example, it would not do you any good when you have a cold. And it might not be the ideal choice at 2 a.m. in the middle of a sleepless night.

Very few people turn to a simple remedy for a bad mood. I realized this when I asked around in my circle of friends and acquaintances.

My research was triggered by the article Tips from Someone with 50 Years of Social Distancing Experience. One of the tips against loneliness and bad moods is to watch positive movies. I’ve been doing this my whole adult life, therefore it never occurred to me that others wouldn’t know this strategy.

So I asked around. And indeed, nobody I know chooses a film as a therapeutic tool. I could hardly believe it. Why wouldn’t people choose to spend their time with something fun and entertaining? Something that has the power to blow their mind free of a lot of worries in just 1.5 hours, and to get them inspired, motivated, and put a big smile on their face.

Most people choose a movie for its entertainment value, not whether it will put them in a good mood. Yet, one doesn’t have to exclude the other: A feel-good movie can be entertaining. In the genres of action, thriller, or crime, the entertainment value is surely high, but these movies usually don’t carry an uplifting message that could cheer you up when you’re having the blues.

Movies have the power to influence your mood. Why shouldn’t we use that?

Movies with a positive message can help you, for example, when you feel …

There should be something for everyone on the list of 66 “happy” movies.

They are all great movies with an uplifting message (no slapstick comedies included).

The list is sorted by release date. Here are a few examples of the range of movies you can choose from:

So grab a big bowl of popcorn (or a cup of ice cream), snuggle up on the couch, and let your ghastly mood be swept away by one of these movies.

66 Movies to lift your mood

1. The Adventures of Robin Hood

5. The Sword in the Stone

8. The Sound of Music

42. Under the Tuscan Sun

If you have a moment, let me know in the comments, I’m curious to find out: What is your absolute favorite movie that will make you happy time and again?

Never be cool. Never try and be cool. Never worry what the cool people think. Head for the warm people. Life is warmth. You’ll be cool when you’re dead. 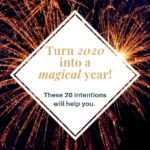 Turn the 2020ies into magical years with these great intentions